×
Installation from the front end

During the installation, if the front side of the rotary shaft seal, so-called front end, first contacts the housing bore, a mounting tool should be used to push the seal from the base of which it is relatively strong. The reclining side of the mounting tool should touch the base of the seal as close to the outer diameter as possible to avoid deforming the pulley, and there should be a stopper part of the tool which allows the seal to be positioned as desired. Another benefit of the stopper is to prevent the seal from being stuck deformed under forces between the bore and mounting tool (press, hand tool etc.).

Chamfer/radius sizes at bore entrance are critical. Housing Bore , so that the seal can be properly installed to the bore.

In addition, if the shaft is mounted in the housing bore, which means the spring side of seal lip faces the shaft during installation, the most significant risk is that the lipsticks around the shaft and reversed. The lip angle on the front (spring) side of seal lip is greater than the angle on the rear (branded) side, in other words this side of the lip is steeper than the other side. Since this side of the lip is free and does not hold onto the seal body, it always sticks around the shaft and reversed just like this.

So, shaft entrance must be clean, free of burrs, chamfered (or have a radius) at the point where the seal lip meets the shaft first. You can find the correct entrance sizes under Parameters > Shaft.

Some special cases, the step on the seal before the actual shaft to work, there are step, rabbet, wedge channel, gear and so on. forms to jump out. Of these, particularly those with a diameter close to the actual shaft diameter present an even greater risk. During the installation, the seal lip can be stuck around these regions or cut in sharp corners. If necessary, these steps should be masked with the help of the jumping apparatus. The first and last surface angles and surface cleaning of the jumping apparatus are also critical. There are crushes, scratches, notches, etc. in the tools, used for a long time and without surface hardening. These tools must be carefully checked before the installation. 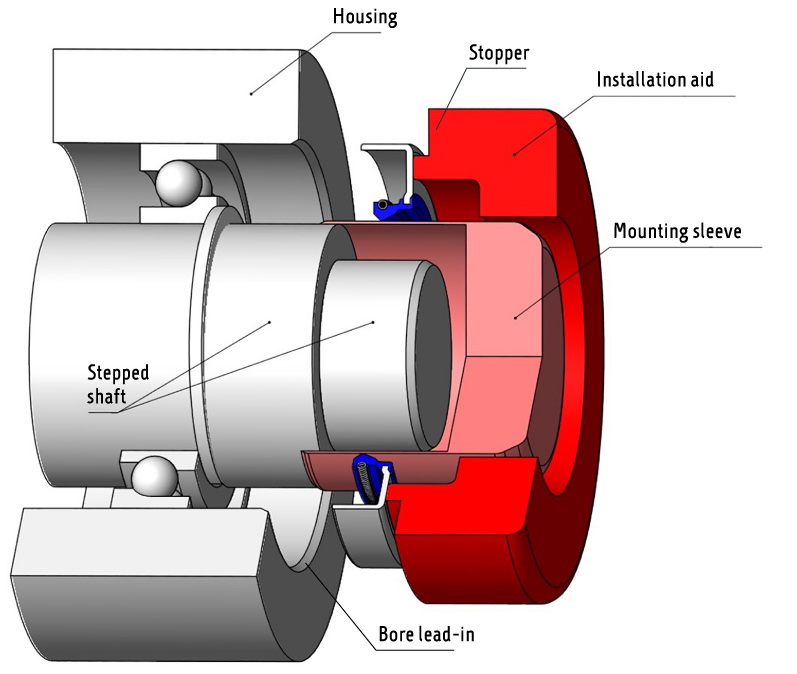 Mentioned basic principles also apply when the seal is first mounted to a flange and then the flange is inserted into the shaft. 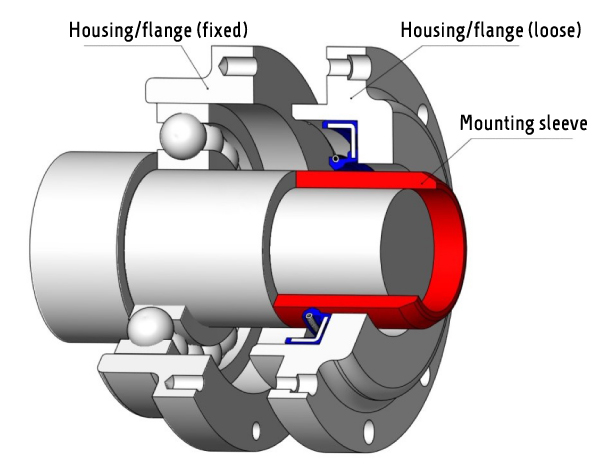 It may not always be possible to use a relatively controlled device, such as a machine, for the installation of large diameter seals. In such cases, for not forcing during the installation and not causing regional damage to the seal,

It may not always be possible to use a relatively controlled device, such as a machine, for the installation of large diameter seals. In such cases, for not forcing during the installation and not causing regional damage to the seal, simple devices are used to distribute the force as evenly as possible.

Installation from the back end

During the installation, if base (back side) of the rotary shaft seal first contacts the housing bore, a mounting tool should be used to push the seal from the inside. The stopper of the mounting tool should be as close to the outside diameter as possible in order not to deform the seal body and touch the lips. There shall be a stopper on the tool which allows the seal to be positioned as desired in the bore. 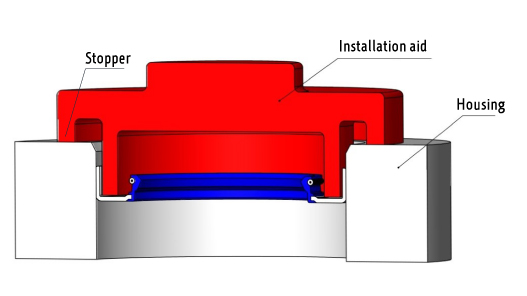 When mounting from the base compared to mounting from the front end, the recline of the mounting tool is less likely to deform seal. Therefore, a tool without stopper can also be used to position the seal in the housing bore, especially in cases where there is a step on which the seal can lean in it. 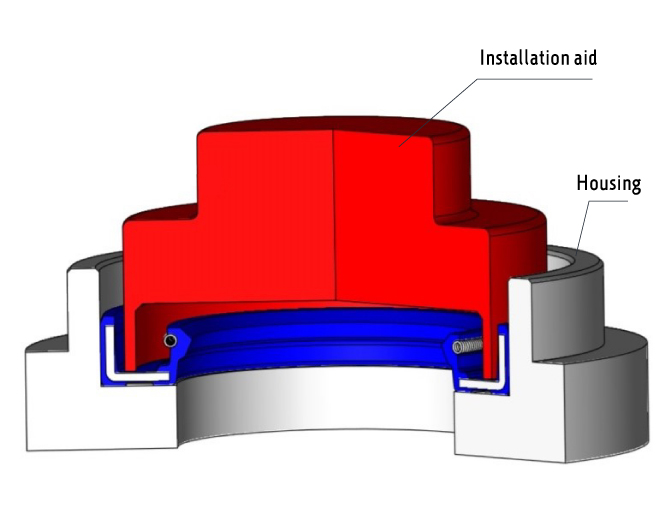 If the shaft entrance meets the base of the seal first, there is practically no risk of the seal lip being stuck to the shaft and turning upside down. Angle of the lip is much smaller in this direction, moreover the lip attached to the inner frame of the seal. The points to be considered in contact with shaft and seal are valid as described above.