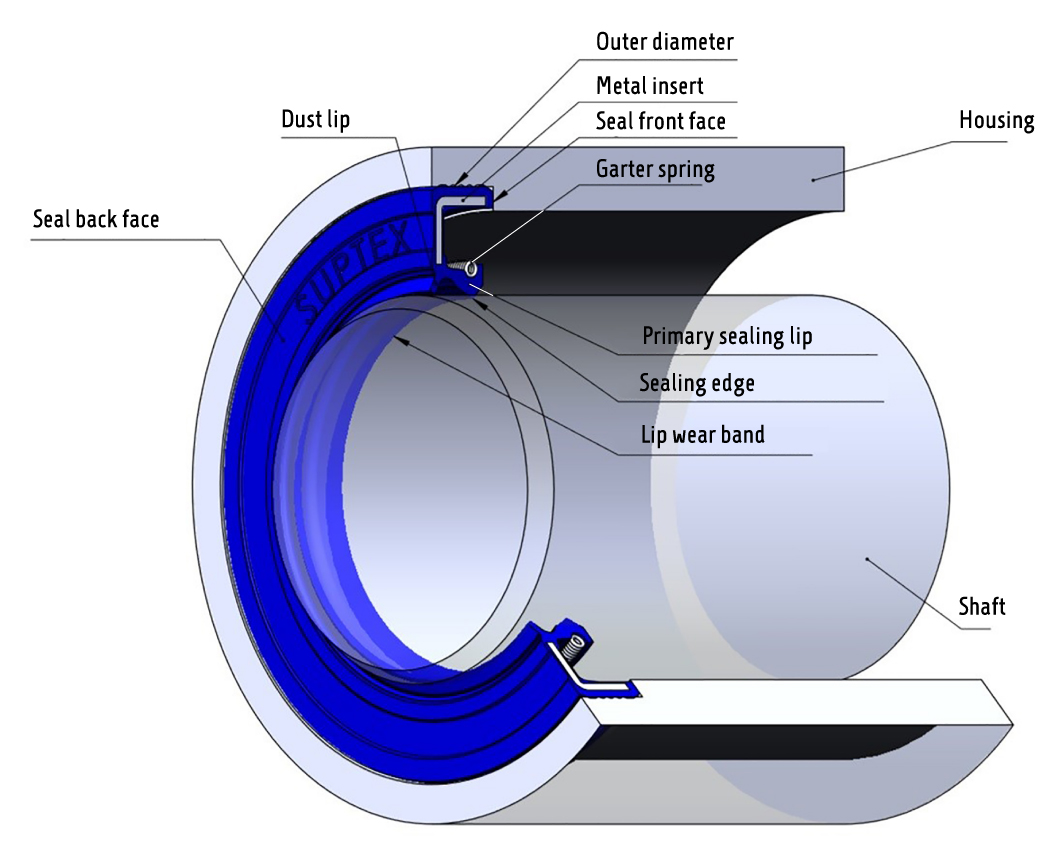 Rotary shaft seals (oil seals), which work on rotary shafts, are machine elements, used to prevent leaking out oil or grease and also prevent entering dust, dirt, mud or other particulates from the external environment. They are also used to seal non-greasy liquids, particulates and various gases, and also provide their essential functions in environments with an effective lubricant that allows the creation of oil film.

Cross section of a typical oil seal and main parts are shown in the figure.

It is the main component of the seal, providing dynamic sealing. It is a basic component that allows the formation of a microscopic oil film by continuously applying a certain radial force on the moving shaft and thus providing fluid sealing. It is the carrier of helical spring in classical oil seals. Its geometry is determined according to the application conditions.

This is the contact area between the shaft and lip along the sealing edge on the lip after the seal is mounted to the shaft. Both the elastic deformation caused by the effects of radial force and mechanical abrasion resulting from the work determine the sizes of the trace tape. Increased bandwidth as a result of abrasion causes leakage in the lip.

Prevents dust, dirt, mud and other foreign matter to entering the system. At the same time, in oil seals, it creates a buffered region between the primary sealing lip and itself to keep the grease applied to this region. Depending on the area of use, it can be a whole with the primary sealing lip or it can be produced from different materials such as wool, textile, PTFE, PU.

It is used to compensate for the increase in temperature during operation and the loss of radial force resulting from swelling of seal rubber lip under various chemical influences over time. The thermal and chemical expansion (thus loss of radial force) of the steel wire in the spring is very limited compared to rubber.

Gives rigidity and strength to the part and makes seal fit firmly into the bore. In rotary shaft applications, the movement of the seal in the bore is definitely undesirable and can cause serious performance problems.

Rotary shaft seals are tightly mounted in the housing bore and the outer diameter of the seal is fixed in the bore, except for some applications. This region provides static sealing on the contact surface. It can be designed from metal or rubber material depending on the application conditions.

It is the face of the rotary shaft seal, which is wanted to seal. In conventional applications, the side in which spring is attached is usually a sealed front face.

It is a surface that is mostly sighted to the external environment, and therefore is exposed to external influences, perpendicular to the shaft axis and which does not contact the fluid to be sealed in conventional applications. It can be preferred rubber covered or metal cased considering the conditions.